Everything on the CPU side (the whole process of driving the GPU workloads) is structured in a sequence of "render stages":

Note: Pipelined rendering is not yet actually enabled in Bevy 0.9. This section explains the intended behavior, which will land in a future Bevy version. You have to understand it, because any custom rendering code you write will have to work with it in mind. 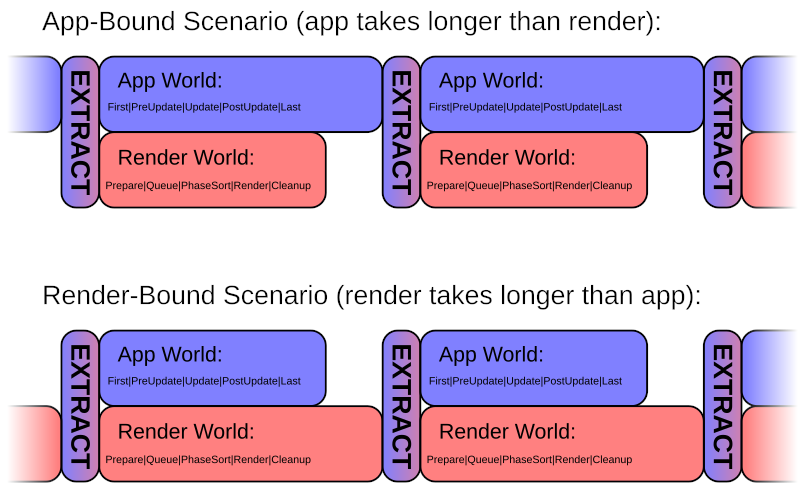 Every frame, Extract serves as the synchronization point.

If vsync is enabled, the wait for the next refresh of the screen will happen in the Prepare stage. This has the effect of prolonging the Prepare stage in the Render schedule. Therefore, in practice, your game will behave like the "Render-bound" scenario shown above.

The final render (the framebuffer with the pixels to show in the window) is presented to the OS/driver at the end of the Render stage.

Bevy updates its timing information (in Res<Time>) at the start of the First stage in the main App schedule. The value to use is measured at "presentation time", in the render world, and the Instant is sent over a channel, to be applied on the next frame.

If you are implementing custom rendering functionality in Bevy, you will likely need to add some of your own systems to at least some of the render stages:

The way Bevy is set up, you shouldn't need to do anything in Render or PhaseSort. If your custom rendering is part of the Bevy render graph, it will just be handled automatically when Bevy executes the render graph in the Render stage. If you are implementing custom phase items, the Main Pass render graph node will render them together with everything else.

You can add your rendering systems to the respective stages, using the render sub-app:

Extract is a very important and special stage. It is the synchronization point that links the two ECS Worlds. This is where the data required for rendering is copied ("extracted") from the main App World into the Render World, allowing for pipelined rendering.

During the Extract stage, nothing else can run in parallel, on either the main App World or the Render World. Hence, Extract should be kept minimal and complete its work as quickly as possible.

It is recommended that you avoid doing any computations in Extract, if possible. Just copy data.

It is recommended that you only copy the data you actually need for rendering. Create new component types and resources just for use within the render World, with only the data you need.

For example, Bevy's 2D sprites uses a struct ExtractedSprite, where it copies the relevant data from the "user-facing" components of sprite and spritesheet entities in the main World.

Prepare is the stage to use if you need to set up any data on the GPU. This is where you can create GPU buffers, textures, and bind groups.

// TODO: elaborate on different ways Bevy is using it internally

Queue is the stage where you can set up the "rendering jobs" you will need to execute.

Typically, this means creating phase items with the correct render pipeline and draw function, for everything that you need to draw.

For other things, analogously, Queue is where you would set up the workloads (like compute or draw calls) that the GPU would need to perform.

// TODO: elaborate on different ways Bevy is using it internally

This stage exists for Bevy to sort all of the phase items that were set up during the Queue stage, before rendering in the Render stage.

It is unlikely that you will need to add anything custom here. I'm not aware of use cases. Let me know if you know of any.

Render is the stage where Bevy executes the Render Graph.

If you are using any of the standard render phases, you don't need to do anything. Your custom phase items will be rendered automatically as part of the Main Pass built-in render graph nodes, alongside everything else.

If you are implementing a rendering feature that needs a separate step, you can add it as a render graph node, and it will be rendered automatically.

The only time you might need to do something custom here is if you really want to sidestep Bevy's frameworks and reach for low-level wgpu access. You could place it in the Render stage.

Bevy has a built-in system in Cleanup that clears all entities in the render World. Therefore, all data stored in components will be lost. It is expected that fresh data will be obtained in the next frame's Extract stage.

To persist rendering data over multiple frames, you should store it in resources. That way you have control over it.

If you need to clear some data from your resources sometimes, you could add a custom system to the Cleanup stage to do it.